skip to main | skip to sidebar

Before I start this tutorial, a small disclaimer. This is my first ever tutorial and an attempt to return something back to the community which helped me learnt the necessary skills and concepts. Feedbacks are welcomes in case you find any kind of mistake / area of improvement in code / blog.

I was asked by someone to show off my learning skills (I like taking practise tasks). I didn't know C# at all and was asked to create a multithreading application with following requirements:


This is the snapshot of the application I made. Not a great looking one but it works. :) 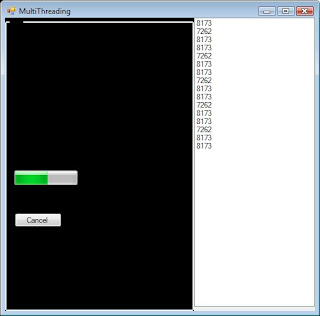 Now lets see what a thread is. Thread is a task which shares the same memory space of the parent application. An application may have various sub-tasks which can perform different operations at parallel.

Now while executing the tasks at parallel, these threads might need to update the same data ( like in this case ). So we come across a situation when two threads modifies the same data block and if this is situation is not handled properly, the latter thread might end up removing the former thread modification. Hence, we need a mechanism which would prevent such cases.

In our application we would perform an exclusive lock to the data at the time of modification( write operation) so that the above mentioned condition can be avoided.

Beware, these situation ends up creating other issues such as deadlock ( where two threads wait for each other's resource forever ). However those issues are not covered in this tutorial.

Now lets come back to the problem and see how its solved.

At first lets create a Thread property class so that we use "DO NOT REPEAT YOURSELF" principle (Pragmatic Programmers).

Now lets do the designing part. As its not Windows form tutorial I would quickly skim over what I did. As long as you are aware of toolbox window in visual studio, it wouldn't be hard for you to create the following components.

Whats we need is

I did put my progress bar and button in a group box for docking purpose. However you may choose whatever suits you.

For simplycity, I would name these components so that the upcoming code is a lot easier.

Now we create the following members. To update the list ( in this case I used integer. You are welcome to extend this to use templates for data independence ).
modifier.Start(propInsertThread); )
Posted by Vaibhav at 11:37 AM

A thread is not a process. This is a fundamental flaw.

Thanks for the correction Zephyr. Fixed it.

Third last para where you ask for 'typos' just after that I believe you meant "something important missing" and wrote 'mission' instead :P

could you describe the applications of threads at the end of the post or as a new post. it will be encouraging to the reader.
nice one. keep it going.